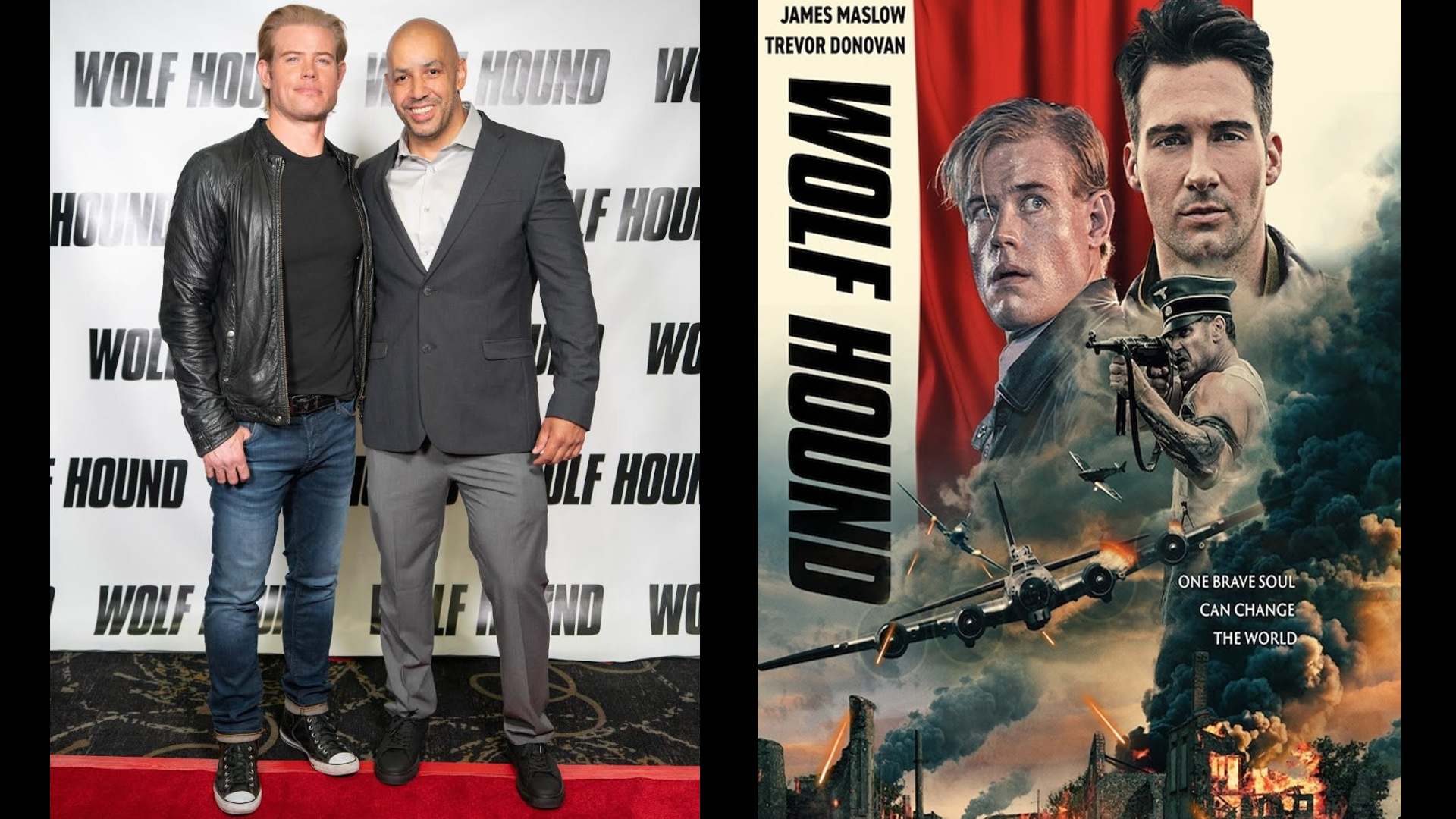 Q: Brian, you are starring in a major new movie called ‘Wolf Hound’ out in theaters, can you explain to us a little more about the film and your role ?

Brian Heintz– A: Yes, Wolf Hound is a fictional historic WW2  film based on true events. It tells a story of “What  If?”…The flight crew of ten operating a B-17, The  Yankee Lady, and two fighter pilots flying P-51 Mustangs, are searching for a hidden camp in Nazi occupied France. They are suddenly ambushed by two extremely skilled Nazi fighter pilots disguised by flying a Spitfire and a Hurricane (both British  planes). The B-17 is shot down, and the four crewman that survived the crash landing (my character being one of them) are taken hostage and  put into a prison at the Nazi camp. As far as the two fighter pilots that were accompanying the crew of the B-17, only one survives and finds himself behind enemy lines as his plane is shot down. Captain David Holden, played by actor James Maslow, finds hidden documents at a crash site of one of the Nazi fighter pilots and learns of their plans to use The Yankee  Lady to haul a huge bomb over London. As Holden is tracked through the forest by a vengeful Nazi pilot named Major Roth, played my Trevor Donovan, he is skillfully trying to make it to see if any crew members survived the crash and stop the fate of London.

My role in this film is one of the main supporting actors, I’m playing Lt. Henry Armstrong. Armstrong is the co-pilot of the B-17 and his character is a no nonsense, kind of grumpy, but cares deeply and will do anything for his men/crew. He’s a big badass and has a hard time trusting others that are not part of his crew. I will say Armstrong has some heroic moments in this film, and there’s one major one that really stands out. It was an honor playing him.

Q: How was the casting process and being on set?

Brian Heintz- A: The casting process for me personally was a unique one. I attended a networking event for artists in Detroit, Michigan and a friend of mine,  Kara Joy Reed (who played Marie St. Laurent) was there with Michael B. Chait, whom at that time I had no idea was a director. We were  introduced to one another and we hit it off  immediately. After chatting for a bit, he looked at  me and said, “Lieutenant Henry Armstrong”. I  said excuse me? And then he proceeded to tell me about his feature film he was preparing to start called “Wolf Hound”. He said that I reminded him of the character Armstrong. Michael B. Chait was not only the director of this film but also the writer along with his friend he met in college, Timothy  Ritchey. I was obviously intrigued and we chatted about it the rest of the evening. I remember  on my 1st day of filming I was so nervous but after putting on the uniform and crawling up into the historically rebuilt B-17, I felt a calmness. My first scene was the scene I  auditioned for. We shot it. Chait yelled “cut”, and  then he said “Brian! That was ten times better then  your audition!” From that point on, my self esteem grew and I nailed every scene I had.

Being on the set of Wolf Hound was simply amazing! Especially the day we actually went up in the Yankee Lady, and I got to sit in the co-pilot seat. I will never forget flying in that historic plane. It flew smoother than a commercial airline. The entire cast I worked with was also amazing and from all over the US. Maslow and Donovan, being the main focal points of the film, were both so kind and genuine. Maslow even let me in his  trailer when I asked him if he would do a FaceTime chat with my friends little ones because they were huge fans of his. He did it without thinking twice. The stunt team led by Ele Bardha were amazing as well. Matter of fact, the  entire cast, and crew all worked extremely well together. One giant “WW2” family.

One more thing I’d like to comment on, was the  day we shot the burning scene of the Nazi flag.  That was such a great bonding day! Everyone was cheering, screaming, yelling, high-fiving, and hugging one another. Another favorite day for me on set.

Q: Do you have a personal message for your audience ?

Brian Heintz– A:  Yes, I do…Thank you! Thank you to all who went to see this in selected theaters nationwide and who rented it from home. This independent film was made with a lot of blood, sweat, tears, and abundance of love. You cannot put a budget on committed artists, both behind and in front of the camera. We made something special here and thank you all for giving us a chance and cheering us on.

Q: How would you explain your year so far in 1 word ?

Q: Can you share with us any other life or career updates ?

Brian Heintz- A:  Yes, I can. I am currently involved in 3 different projects locally in my home state of  Michigan that begin filming this summer. One is a short film that I play the lead in titled “Box”, the other is a short story in which I have a supporting role in titled “Thorn”, and the last one is a co-star/cameo appearance in the feature film “Chasing the  Ghost”.

I recently have started collaborating with Magda Fuskova of GAT Management out of Santa Monica, California courtesy of my branding manager, Sophia Felix of HBM Talent & Management.